Celebrating the Opening of the Leslie N Shaw Park

Celebrating the Opening of the Leslie N Shaw Park

The community celebration of the Leslie N. Shaw Park on February 27 was a glorious day to acknowlegde the hard work that brought this park to completion, to honor Postmaster Leslie N. Shaw, and to begin to enjoy this fabulous new park.

On a beautiful sunny day the community came out to celebrate the completion of the Leslie N. Shaw Park after years of work by the UNNC in conjunction with Council President Herb Wesson and the Department of Recreation and Parks.

The park is named after the first African American postmaster general appointed to a large city, by President Kennedy and so it was appropriate that the park was opened during Black History Month on February 27, 2016. People from all walks of life came out to join the celebration which included:

The speakers on program were:

After the speakers everyone gathered by the playground equipment for the ribbon cutting. The park renovation was a long time coming, but in the end it was well worth it. Jefferson Park now has a park where families can gather to exercise, play and celebrate. Leslie Shaw park has changed the quality of life in this community! 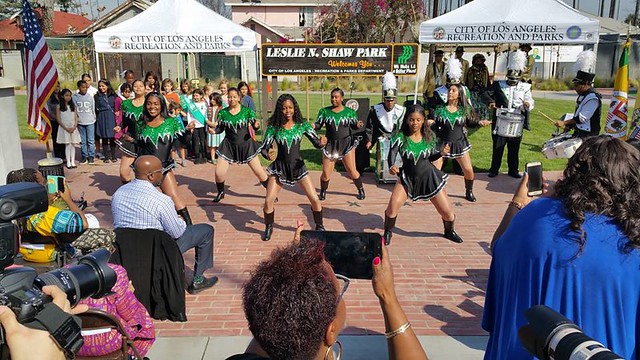