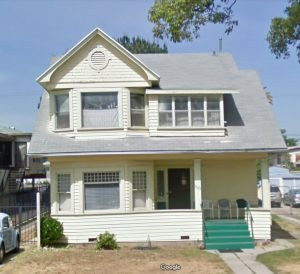 UNNC tries to balance many elements when we look at development proposals. We advocate to preserve historic houses and to conserve the character of our century-old neighborhoods, while at the same time encouraging new housing. Recently we were able to balance these goals in a project UNNC hopes can serve as a model in our Historic Preservation Overlay Zones (HPOZ) and our Character Residential and Community Plan Implementation Overlay Districts.

In January, the UNNC Governing Board unanimously approved a motion to support a new housing development within the district at 1619-1623 South Van Ness in Angelus Vista. The project is currently in plan check but has had a long history of design revisions before it reached its present iteration as a preservation-forward project that maintains two historic single-family houses and builds four units of much-needed rental housing in the rear.

The journey began in 2019 when the developer, Maven Partners (a minority and women-owned company), bought the two contiguous properties, which at first glance had no historical protections on its existing structures, and proposed demolition to make way for eight rental units in four new structures, conforming to the zoning of the properties.

In an apparent historic-survey error, the City Planning Department excluded the entire west side of Van Ness Avenue, including the two houses at 1619 and 1623, from SurveyLA, one method of identifying contributors to the Angelus Vista Character Residential Overlay District, which is equivalent to a HPOZ-Lite. (The UNNC Planning and Zoning Committee is currently working with the Planning Department and the Council Office to fix these errors by using alternative surveys.) When the developers, who had no indication of this oversight from Planning, went to pull a demolition permit for their previously submitted all-new construction development, community members intervened out of concern for the houses and character of the neighborhood. 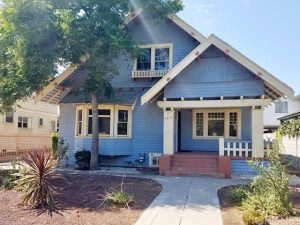 That set-in motion a long series of actions and negotiations between Council District 10 (CD 10), under Councilmember Herb Wesson, UNNC Planning and Zoning co-chairs John Arnold and Laura Meyers, and the developer to find a solution that would meet the neighborhood goal of keeping the houses and maintaining the character of Van Ness, but still allow the developer to build new units. Through the summer of 2020, and through much hard work, a new project was designed that features two new 3-story duplexes, compatible with the existing houses and located in the rear yards of the deep lots. The new structures will be only subtly visible behind the tall, peaked roofs of the front houses and down their shared driveway.

Although the resultant scenario, with only six units instead of eight and a delay of almost a year, was not what the developers initially wanted or envisioned, they realized that the preservation-forward redesign would meet the intent of the character overlay zone and be more acceptable to the neighborhood, and ultimately a better fit.

The project will be a win for the neighborhood, providing more housing and helping preserve the character of this block of Van Ness. Though the root cause of the project having to be redesigned was attributable to neither negligence nor overreach, the developer, residents, and CD10 liaisons acted in good faith to find a solution acceptable to all – a testament to trust, collaboration, and cooperation to help make appropriate development happen in the UNNC area. Construction will start in mid-2021 once plan check is complete.