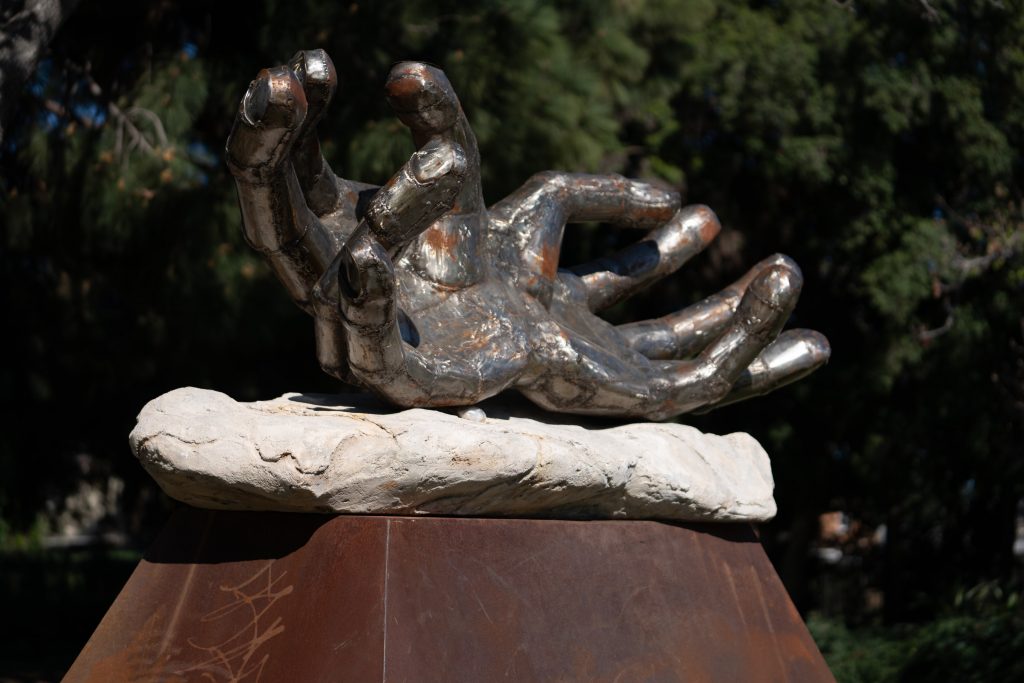 Sponsored by Kindred Arts, City of Los Angeles Council District 10, and the Los Angeles Department of Cultural Affairs, the works by Hank Willis Thomas, Christopher Myers, Koby Kennedy, and Arthur Jaffa are on display at four locations across South Los Angeles and Downtown through May 2022.

Situated on carefully considered publicly-accessible sites, the works collectively honor and examine aspects of the African American experience, from the first slaves brought over in the 16th century, to the present-day prison pipeline, and the struggle for liberation in between. Each individual work is an invitation to viewers to learn about and connect with a narrative or era that continues to impact the African American experience.

Kindred Arts is a cultural equity initiative that conceives and presents community arts programming in public spaces, using art as a catalyst for civic dialogue; as a vehicle for communities to express identity; and as a tool with which to forge a sense of space and place. Kindred Arts‘ mission comes from a passionate belief in the power of art and community to create inspiring personal experiences and foster social progress.

One of the collaborating artists, Hank Willis Thomas, described his interest in public, monumental art.  “Monuments are critical tools in shaping the values and identity of society. Most of what we know about many ancient cultures — Egypt, Great Zimbabwe, Greece, Rome — are through public monuments. So we have to imagine that much of what future generations will know about us is through the monuments we choose to put up and preserve,” he wrote.  “At their best, monuments become a locus — a point around which people can gather and commune. In particular, I’ve always admired the sculptures of Swedish-American artist Claes Oldenburg, who could take any quotidian object, such as a garden spade or badminton birdie, and monumentalize it. In Philadelphia, where my mother is from, he made a colossal clothespin that sits outside of City Hall. But, his sculptures tend to be of Western, American, middle-class iconography. When I designed All Power to All People, of an Afro pick with a raised fist, I wanted to make an object that spoke specifically to African Americans.”

Thomas’s All Power to the People is on display at Leimert Plaza Park, 4395 Leimert Blvd.

Within UNNC’s footprint, at the West Adams Avenues / Benny H. Potter Park (2413 2nd Ave.), Christopher Myers’ Caliban’s Hands is showcased. This colossal sculpture is described as “symbolic of the indigenous cultures occupied and suppressed by European colonial societies, and speaks to the dynamics of privilege, oppression, and forced servitude. The title references a character from Shakespeare’s Tempest. Many consider the play an allegory of European colonization, and throughout the centuries, Caliban’s character has featured prominently in arguments that defend or resist colonialist tyranny.”

In addition, The Box by Colby Kennedy is located at the National Center for the Preservation of Democracy, 100-198 N. Central Ave.; and Big Wheel IV by Arthur Jafa will be coming soon to Nate Holden Performing Arts Center, 4718 West Washington Blvd.